The streets of Budapest are oozing in history, architecture and culture. When the city lights replace the sun, Budapest is at its most spellbinding. From soaking in the thermal spas, to cruising along the Danube, my Budapest nights were simply magical.

A stroll beside the Danube is the perfect way to end a day full of sightseeing. Watching the reflection of the city lights glimmer on the water-top is simply captivating. The path flaunts spectacular views of the Parliament Building, Buda Castle, the Chain Bridge and much more. The walk is also home to the moving memorial named ‘Shoes Along the Danube’ which is dedicated ‘to the memory of the victims shot into the Danube by Arrow Cross Militiamen between 1944-45’. The memorial was a sobering sight and sent a powerful message.

Budapest is blessed with one of the most dazzling waterfronts in Europe. Consequently, taking a boat cruise along the Danube river is the best way to see the, breathtakingly beautiful, panoramic views of the city. The sparkling lights of the Parliament Buildings and Buda Castle look even more majestic from the river. After a long day of touring the streets of Budapest, I thoroughly enjoyed relaxing with a drink in my hand.

Soaking in the Thermal Baths

Budapest is also known as the ‘City of Baths’ due to the fact that it possesses a copious amount of amazing spas. The largest, and perhaps the most crowd-pleasing of which, is Szechenyi. And, who would have thought that taking a bath with 100 strangers could be so relaxing? I loved the baths at Szechenyi so much that I visited them twice during my Budapest trip. There are 18 different pools ranging between 18°C and 40°C. Subsequently, soaking in these baths is enjoyable no matter the time of year.

The Hungarian State Opera House is considered an architectural masterpiece. It’s interior is simply beautiful. Hence, I determined that my trip to Budapest was the opportune occasion to watch an opera for the very first time. Tickets were exceptionally cheap. For seats towards the rear of the theatre, tickets were 1,500 HUF – approximately £4 GBP/ $5 USD. Nevertheless, our seats were upgraded for free and we were treated to seats at the front. We went to see the Shakespearean classic, King Lear. Although there were English subtitles, the opera was entirely in Hungarian. Subsequently, I found it somewhat difficult to follow. Despite this, I am pleased that I had the chance to experience such talent in such a stunning setting. 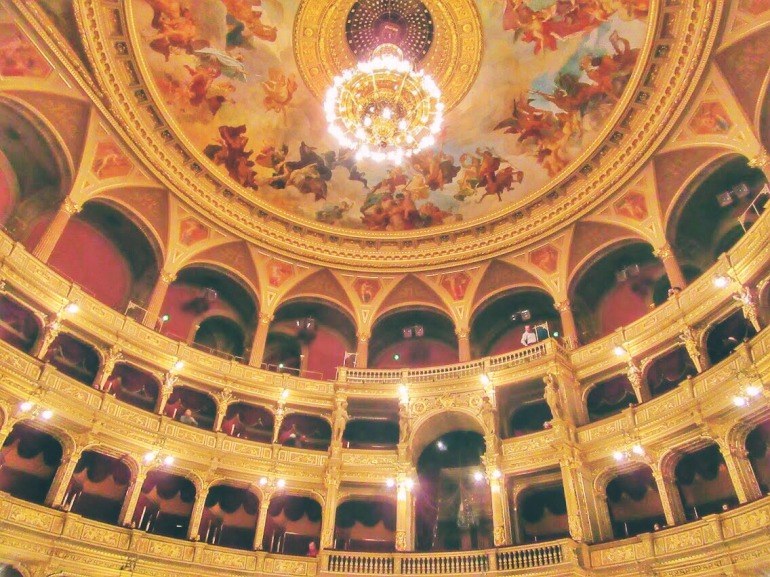 Budapest is one of the most underrated European cities that I have ever visited. With architectural gems around every corner, it truly is exceedingly beautiful.